Beltline Boil on a Blue-Sky Saturday

Saturday dawned chilly, but perfect for a walk.

I uncharacteristically slept in after a late Friday night out with my cousin, Amy. We attended a networking cocktail hour for a media company she occasionally works for - she's a professional makeup artist.

One of the couples we sat with had their precious 2-month-old baby girl with them. When I could no longer contain myself, I asked to hold her. Typically, I'm the baby whisperer, but I must have been off my game, cause that little sweetie was having no part of me. I felt bad handing her back to her mother while she was crying. It was an interesting group, and we had a lovely time.

The evening broke up early, so we decided to go to one more place, along with one of the guys, David.

It was raining out.

We ducked into one place, but decided not to stay.

I had my arm around Amy's shoulder as we exited, because I was sharing her umbrella.

I was wearing ankle boots with a high heel, and I hit a slick spot while walking down the ramp.

I had that moment of flailing - my brain shouting, "She's goin' down" - of course gripping onto Amy all the harder. She reached out for the railing, but down I went, dragging her down on top of me. The only thing hurt was my pride, but mostly we were laughing so hard it didn't matter.

David helped us up, and we were on our way, a wet spot down my side. And no - I wasn't drunk. That ramp could have used a slippery-when-wet sign.

Crying babies, falling down wet ramps hmmm...no really, we did have a fun evening. But, I digress. 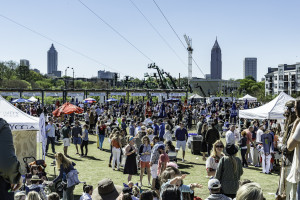 Those folks who plan the Beltline Boil have done well in picking the weekend. This is the second year I've been, and it was a gorgeous weekend last year as well.

The Boil was held in the huge green space next to the Skate Park.

Amy and I and my neighbor, Jamie, and her friend Sean all walked down together. The simple pleasures in life - strolling along with friends on a beautiful Saturday afternoon.

I put away all my troubles to embrace the moment and enjoy myself. It felt like I had all the time in the world to do everything and nothing, and I offered up a quiet prayer of gratitude for the blessing of being alive and healthy and in the company of friends on such a splendid day.

We got inside, grabbed a drink, and walked around exploring the offerings. Of course I was snapping photos. There was a bandstand set up with several bands scheduled to play throughout the day. There were food trucks with crazy long lines, which we declined to stand in. There were all sorts of merchants hawking their wares. 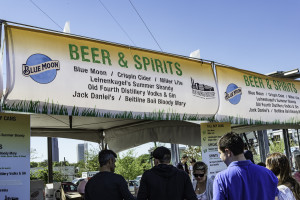 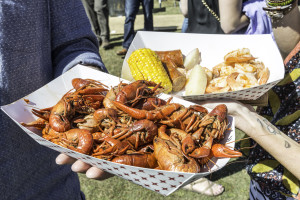 A couple of hours later, and we were wandering back down the Beltline with the thought of going to Ladybird.

Apparently, everyone else had the same thought! It was packed, so we sat outside across the way at Kevin Rathbun Steak instead and had a drink and shared some appetizers.

Jamie has lived in the neighborhood for 10 years, so even in those huge crowds, she was running into friends.

The Beltline was a tide of humanity rolling along - adults, teens, babies, kids, strollers, bikes, skateboards.

Everywhere we turned, there was a cute toddler or puppy.

I wish I could take Bauer along on these outings. Poor guy would have a coronary if I tried.

The weather could not have been more conducive to sitting outside. Before we could blink it was 6:30, so we closed out and strolled down to Krog Street Market. We wanted to look at the wine selection at Hop City, of which they have a good one.

We spent a few minutes talking to the guy at the register and ogling the $1,100 bottle on the shelf behind him.

Amy peeled off to catch up with a friend for the evening, and Jamie, Sean and I wandered over to Old Fourth Ward Pizza.

We ran into another of Jamie's friends in the parking lot who joined us for the evening as we went from there to Jamie's and then on to my place.

It was an extravagantly wonderful day that didn't end until after 1 a.m., and I felt good for allowing myself to simply relax and embrace it.

But, now it's Monday and back to the reality of rustling up business and looking for work.

I hope you enjoyed your weekend too! 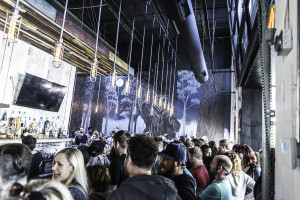