Tuesday morning early, and I was drifting in a semi-dreamy wakefulness. An insistent sound on the roof dawned in my consciousness as rain; honking scooters, the squeal of tires on wet pavement, shouts, and police whistles penetrated my sleep.

I sat up, disoriented, and remembered where I was - in an apartment in Phnom Penh!

I heard noises in the kitchen, but after two days without a shower and little sleep, I wasn't ready to meet my housemate quite yet.

I turned on the wifi on my phone, answered a few texts to let family and friends know I was safe, and, without intending to, fell back to sleep.

I got up, stretched and jumped in the shower. The water was lukewarm and the flow was weak, but it was such a relief as I soaped up and brought myself back to life. Afterwards, I stepped out onto the mat, shivering, reveling in the chill that would soon enough be banished by the heat and oppressive humidity.

A little while later, I was thinking about a cup of coffee and how to obtain one, when I drifted off to sleep on the couch!

Jet lag is real when you've time traveled ahead by an entire day.

Before I knew it, Tarek was knocking, and I couldn't comprehend that it was already noon.

No matter. We headed out by tuk-tuk to get some lunch.

Tarek instructed the driver to take us down by the riverfront. As we drove, Tarek explained the geography of the rivers and where they came together - I believe the Mekong and Tonle Sap - but don't quote me on that!

We arrived, and the tantalizing smell wafted out as we proceeded in.

My empty stomach rumbled. I had left my dinner barely touched on the Air Asiana flight from Seoul the evening before. This restaurant, like a majority of the restaurants in Cambodia, was open air with only a roof to protect from the rain. We sat on the terrace near the river's edge and relaxed back into some comfy cushioned patio chairs. The fans overhead spun lazily in the turgid heat. 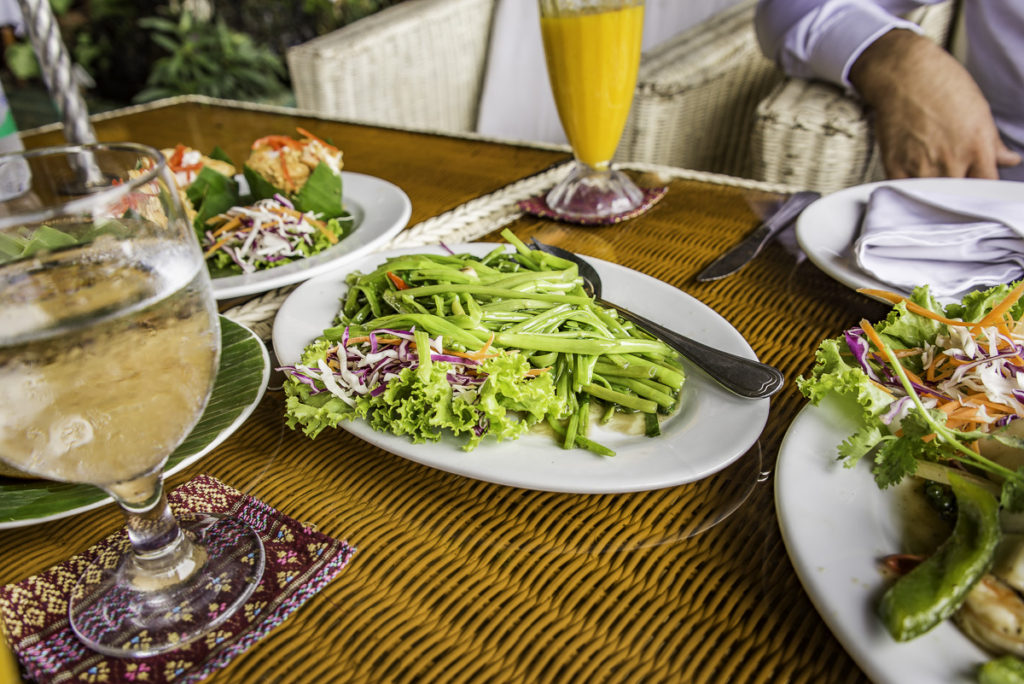 We had fresh mango juice that was thick and icy - the perfumed aroma and taste a sensual delight.

The veggies were garnished with green sticks of peppercorns that we ate right off the stalk - delicious!

The sauce was a savory curry.

As we sat by the river, we bounced from topic to topic, querying each other about old high school friends and current events.

Tarek is a wealth of information about geopolitics, economics, and history.

He's traveled to nearly 70 countries. He is a citizen of Egypt and the US and has lived in places all over the world - Saudia Arabia, Poland, and Beirut, to name a few.

He was a Chinese history major in college because, as he says, Asia is the future. It's fascinating to hear his view on many subjects.

My first lunch in Cambodia did not disappoint! Afterwards, we went back to Tarek's office building. He's an investment banker specializing in mergers and acquisitions. He has his own company, but also works doing valuations for another company -  interesting stuff. 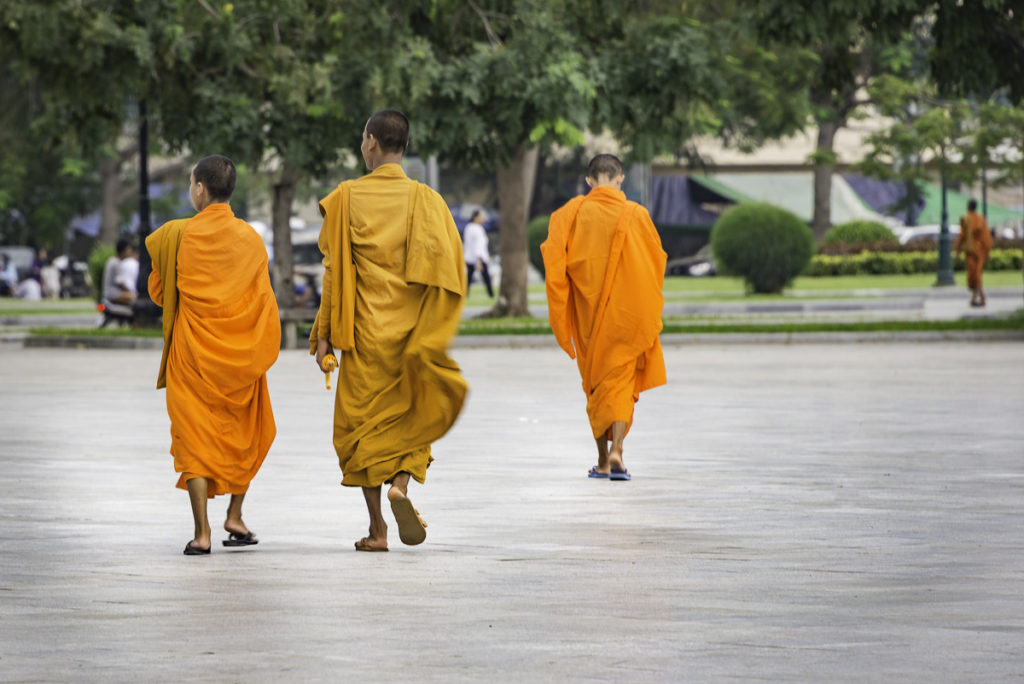 I was left to wander the streets of Phnom Penh alone while Tarek worked.

He told me any tuk-tuk driver could get me back to his office as long as I said, "Take me to Naga" - the large casino next door.

We arranged to meet back at the office at 4:30. That gave me 2-1/2 hours. As I descended to street level, it was a little like being a fish out of water - so little with which to orient myself.

I had a moment of trepidation, having no GPS in which to plug in the coordinates and blithely follow to my destination.

I settled on taking a walk down to the Royal Palace, which I had glimpsed from the tuk-tuk.

I was immediately brought up short by a test of nerves - crossing the street!

Holy moly - crossing the street in Phnom Penh is an art, one I wasn't practiced in! Oy! I didn't have a death wish, and I briefly entertained hiring a tuk-tuk just to get across, but no, I was determined to walk.

I stood at the corner near a large traffic circle watching, hoping I could tag along behind a veteran.

Everything and anything was coming at me with no apparent break in the flow and, as far as I could tell, no rules. I watched a couple of intrepid pedestrians, held my breath and stepped out into the traffic.

I winced at how closely the scooters careened past (having nearly been run down in Rome, Italy some years ago, I'm a little shy of scooters), but somehow I made it to the middle of the circle - whew - only two more streets to cross to make it to the large park running down the middle of the boulevard.

Seriously - my heart was pounding by the time I reached the park. I had my cameras in my backpack, and I pulled one out and commenced a leisurely stroll. 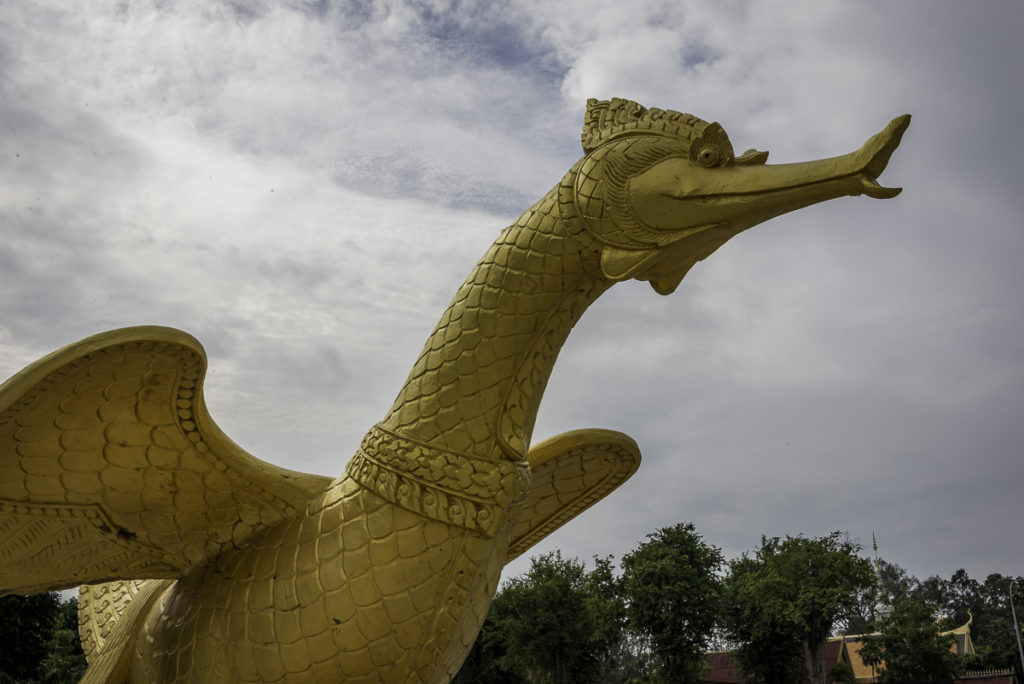 Trickles of sweat ran down my back as I made my way toward the palace.

The population in Cambodia is young, at least partially due to the genocide that wiped out nearly a generation.

I retreated farther into the middle of the park away from the street to avoid, for at least a few minutes, the constant offer of tuk-tuk rides, tours, food, garments.

I was a roaming beacon for salespeople!

I strolled around taking photos and people-watching for about an hour. I sat down on a bench under a tree near the street to try and cool down a little and watch the world go by. 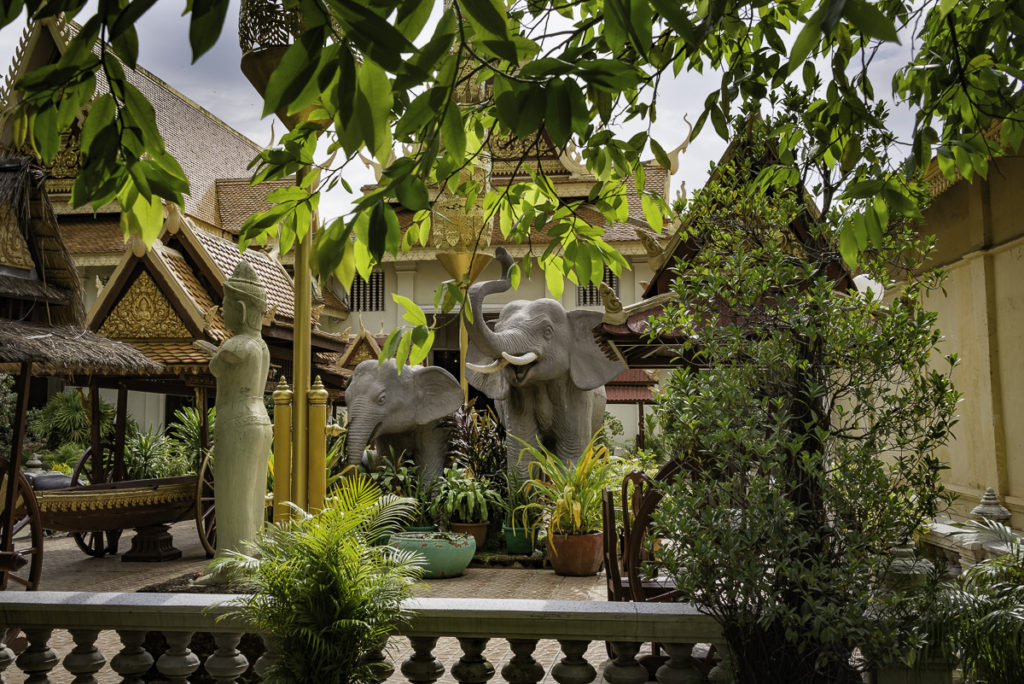 I was quite content soaking in the sights and sounds, but a very persistent tuk-tuk driver spotted me.

After about the fifth "no," and a little bargaining - in which I understood almost nothing - I consented to a tour of some sort, mainly because I admired the man's persistence and knew that what was so little to me - a couple of dollars - meant a lot to him.

I was thoroughly enjoying the tuk-tuk rides (with the exception of the dirt caking up on my face as we rode) since they were an adventure in and of themselves.

It was amazing the tight spots the drivers squeezed the little conveyance through, zigging and zagging their way along. It was not uncommon for a driver to swerve wildly to the wrong side of the street if he saw an opening through the traffic, swerving right back again as soon as he saw his chance.

Tarek assured me that in a few days I would sense the flow amidst the chaos. He was right. 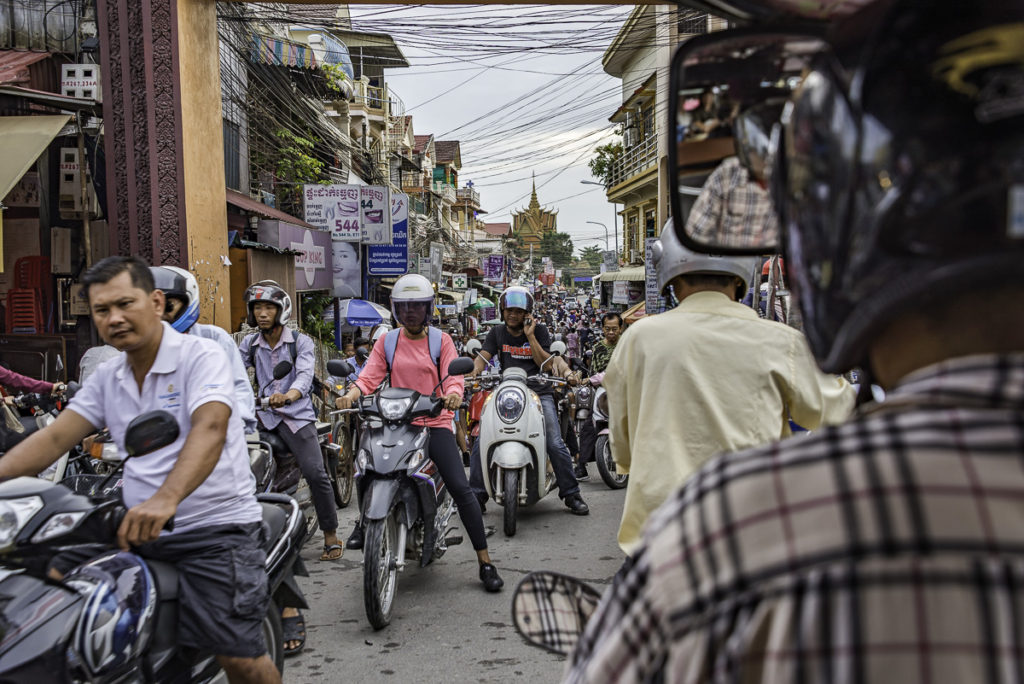 After my grand tour, it was nearing 4:30 and time to rendezvous with Tarek.

I headed back to his building where a welcome blast of arctic AC greeted me as I opened the door to his office.

The four guys who worked there all called out a cheerful hello. One of the young men told me that Tarek had already left to go meet his girlfriend, but that he would be accompanying me back to the apartment.

About half-way back to the apartment, I realized that this was my housemate.

"Ahhh...you're Praveen who lives in the apartment!" Praveen laughed a "yes."

Traffic was madness at 5 pm.

Upon arrival to the apartment, Tarek and his lovely girlfriend, Dominique, were chatting and relaxing.

Dominique was all decked out - on her way to a party to celebrate the 50th anniversary of Charles de Gaulle's visit to Cambodia.

Dominique is French-Cambodian - with a Cambodian mother and French father. She grew up in France after evacuating Cambodia with her parents on one of the last planes out before the Khmer Rouge took over. She came back to Cambodia eight years ago and works for an NGO that digs wells to provide fresh water.

She and Tarek seem a perfect match.

Tuk-tuks are ubiquitous and easy, but Praveen called for a car (a new type of service in Phnom Penh - the equivalent of Uber) for Dominique so she wouldn't arrive at the party caked in a layer of dirt and dust. 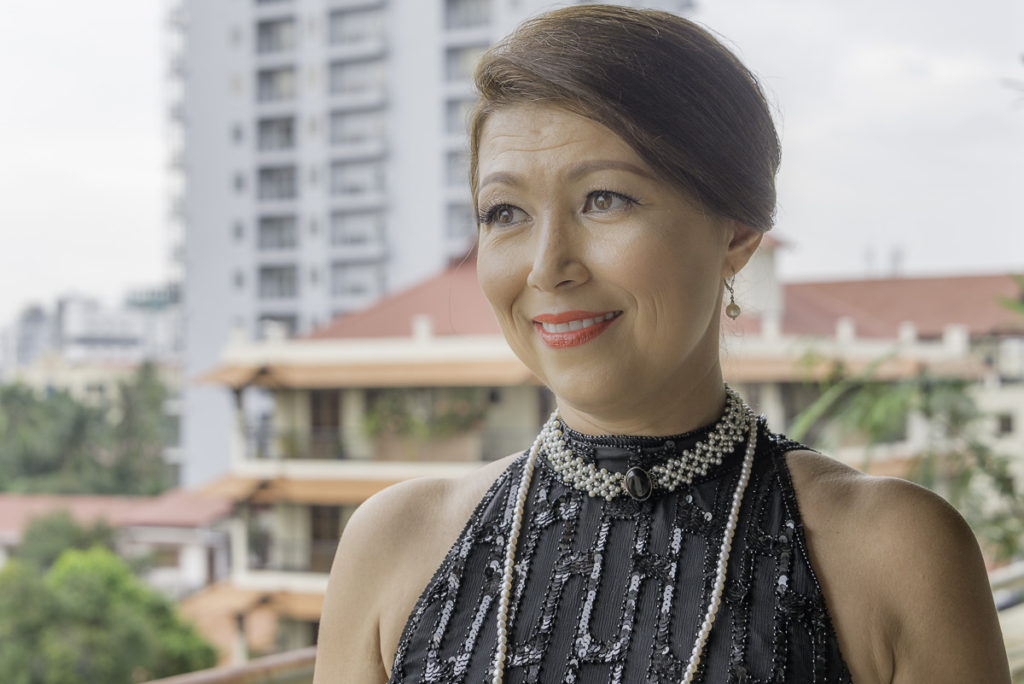 After Dominique left, Tarek, Praveen and I headed out for a bite to eat. We sat outside in the warm rain, protected by a thin awning, and enjoyed pizza and beer.

Not Khmer food, but delicious.

After dinner, we stopped for a drink at a tiny little bar with which Tarek and Praveen were familiar.

We chatted with the young girl who was the owner. It's easy and cheap to start a business in Cambodia these days.

We hung out at the bar talking for a while. The ex-pat community is small, and everywhere we went, Tarek and Praveen ran into someone they knew, or they saw someone from afar who "owns such and such and is related to so and so and is doing a deal regarding thus and such."

I listened and tried to take it all in.

We headed back to the apartment in the semi-rain where Tarek left us with the plan of my meeting him at his office for lunch the next day.

I climbed into bed happy and exhausted.