I awoke Wednesday morning to the now familiar sounds of the bustling street below and the realization that an umbrella would have been a good addition to my luggage. It was still the rainy season, though nearing its end.

With plans to meet Tarek at his office at noon, I set out early to take a tour of the Royal Palace, which Praveen had recommended. I wore loose-fitting, long cotton pants and a long-sleeved light cotton blouse over a tank top.

It's a delicate balance - trying not to overheat, yet dressing respectfully. As in Rome, one is not allowed into the sacred sites without being modestly attired - no shorts/short skirts/tank tops, short sleeves etc.

Tarek's favored tuk-tuk driver, Bon Loy, spotted me the minute my feet hit the curb. "The Royal Palace," I said as I climbed in. (Now haven't you always wanted to climb into a tuk-tuk and say that to your driver??)

Dirt had turned to muddy slush on the road from the morning's rain, which had thankfully abated. It made for especially dirty driving as bits of muddy debris were flung everywhere. I sat back and marveled that, as Tarek had said, I was beginning to see the flow emerge from the chaos that propelled the drivers through the mad traffic of the streets of Phnom Penh.

About 10 minutes later the Royal Palace came into view, rising like a jewel from the gray and turbulent skies. The air was hot and heavy. 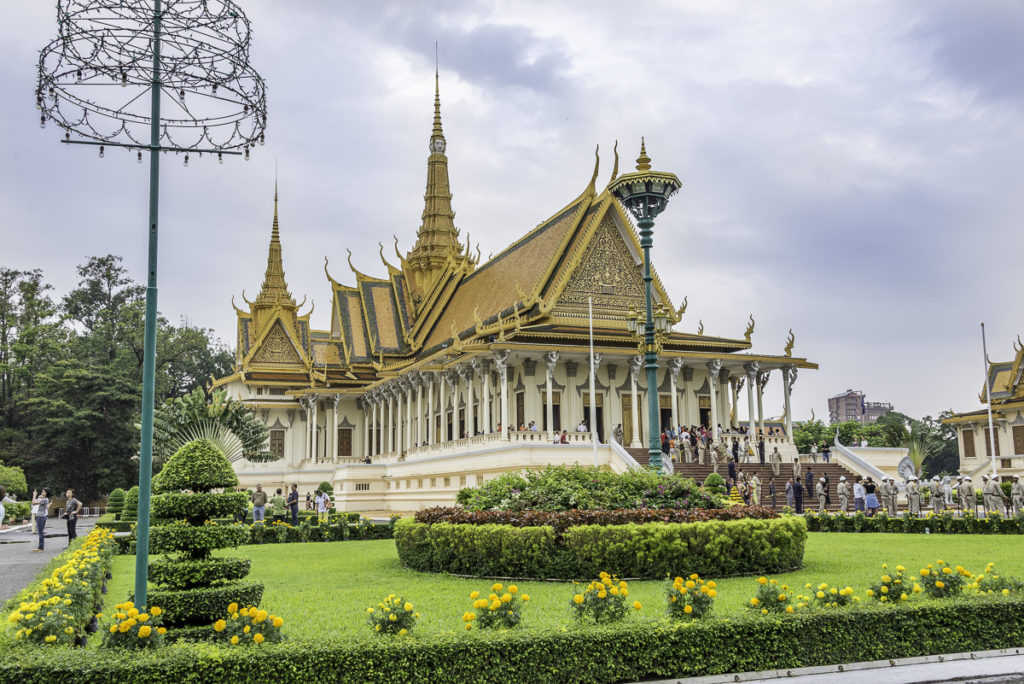 After obtaining a guide and paying the entrance fee, I stepped inside.

The first thing I saw took my breath away - a beautiful flower from the Bodhi tree. It touched my heart, because a treasured loved one is named Bodhi.

It is said that Buddha attained enlightenment while meditating under the Bodhi tree. We ventured further, and I learned about the different gateways that lead from the Palace grounds.

One is the Ghost Door, so named because it's the door the royalty are carried through after they have died. The gate at the front is for visiting heads of state. 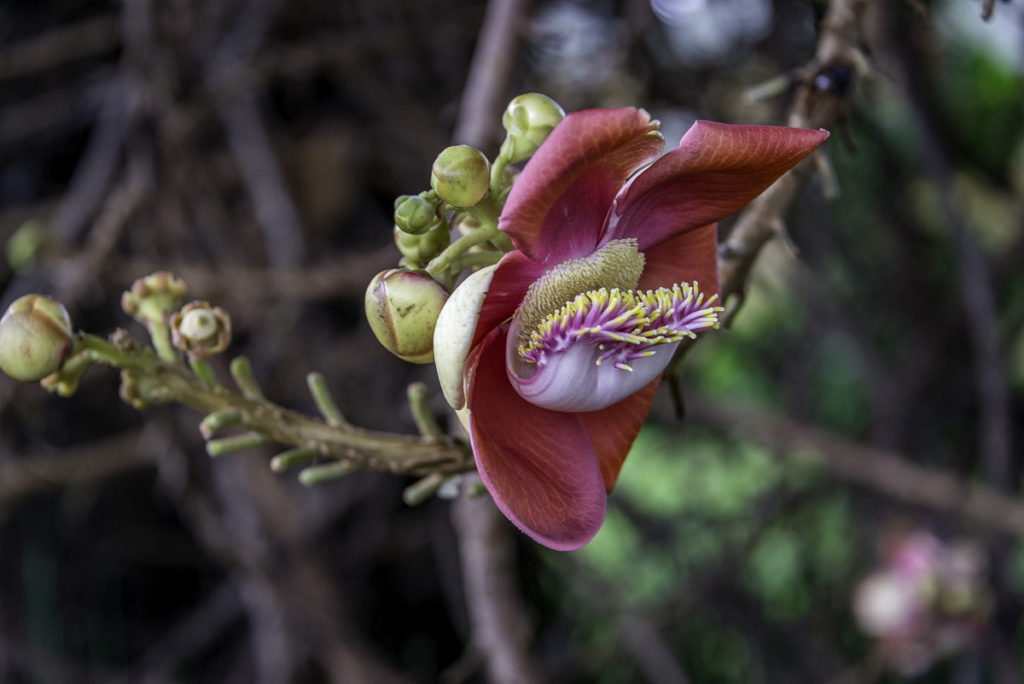 At that moment, the guards were readying for the Chinese president's visit.

We moved on to Throne Hall where, you guessed it, coronations take place.

From the terrace of the Throne Hall, we had a view of Hor Samran Phirun - "The Pavillon where one sleeps peacefully."

This is where the king would rest and wait to mount an elephant for royal processions.

Sadly, the Khmer Rouge destroyed all but one elephant in Phnom Penh, because elephants were considered spiritual and a symbol of royalty. 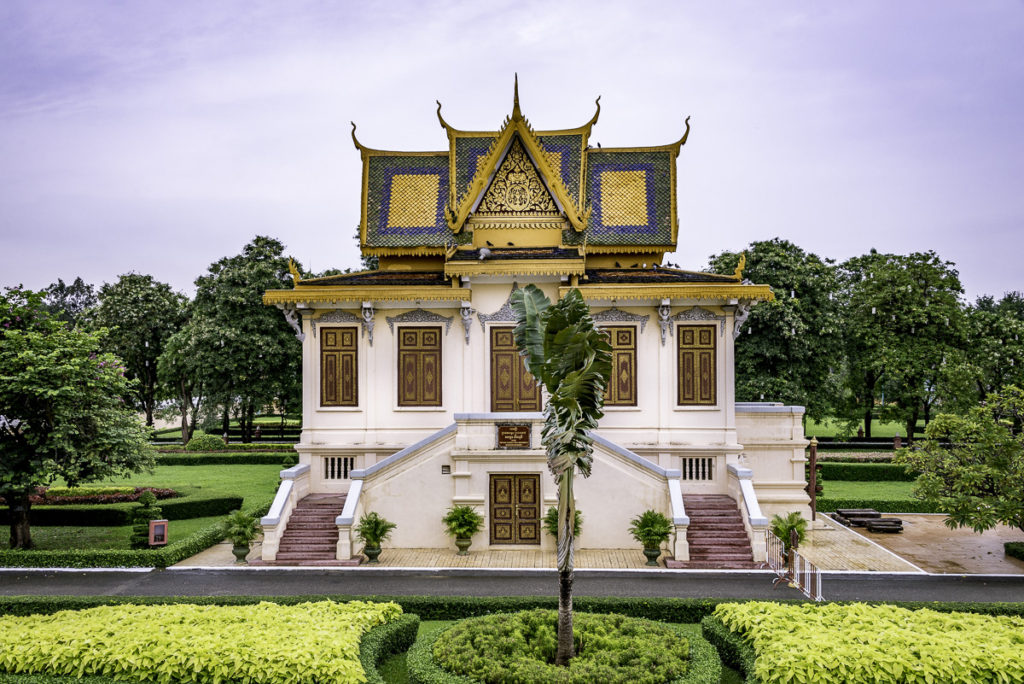 I saw the Bronze Palace and the Silver Pagoda - all housing beautiful royal artifacts.

I learned the significance of the varying placements of Buddha's hands and feet in the many statues that graced the palace grounds.

As we left the Silver Pagoda, the sky opened up and wept big fat drops of rain in copious quantities.

I was without an umbrella, but my camera bag at least had a raincover. After finishing with my guide, I retraced my footsteps back to the courtyard and took refuge underneath a huge tree from which I could watch the rain. It's boughs were overarching and protected me a little from the downpour. I sat and listened to the rain, breathing in the scent of the foliage and flowers. 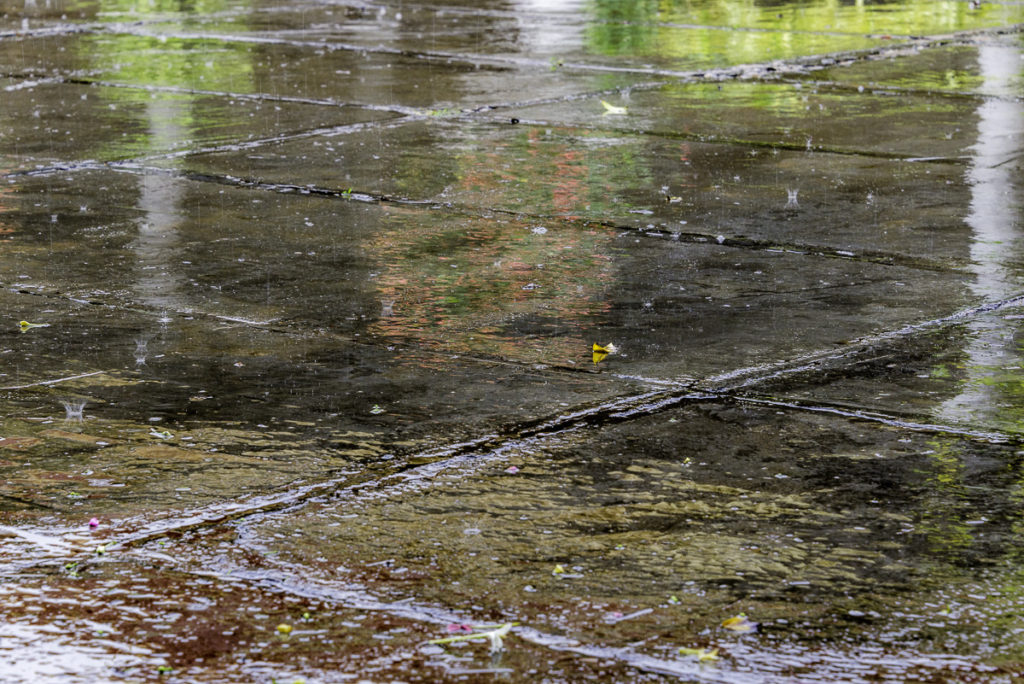 I was mesmerized by the reflections of the raindrops bouncing off the pavement and tried to capture it with my lens.

The heat was oppressive, though mitigated somewhat by the rain, which, with a rumble of thunder, announced its intention of staying a while.

I got up and walked back toward the exit. I sat down on a bench under an umbrella, looking toward the statue of Buddha and spent some time meditating about where I was (both physically in the moment and on my life's journey) and how I got there.

The pitter-patter of the rain was a soft background for the call of the birds.

Such peace. I was roused out of my reverie by a guide telling me I would have to leave because the palace was closing for the noon hour. 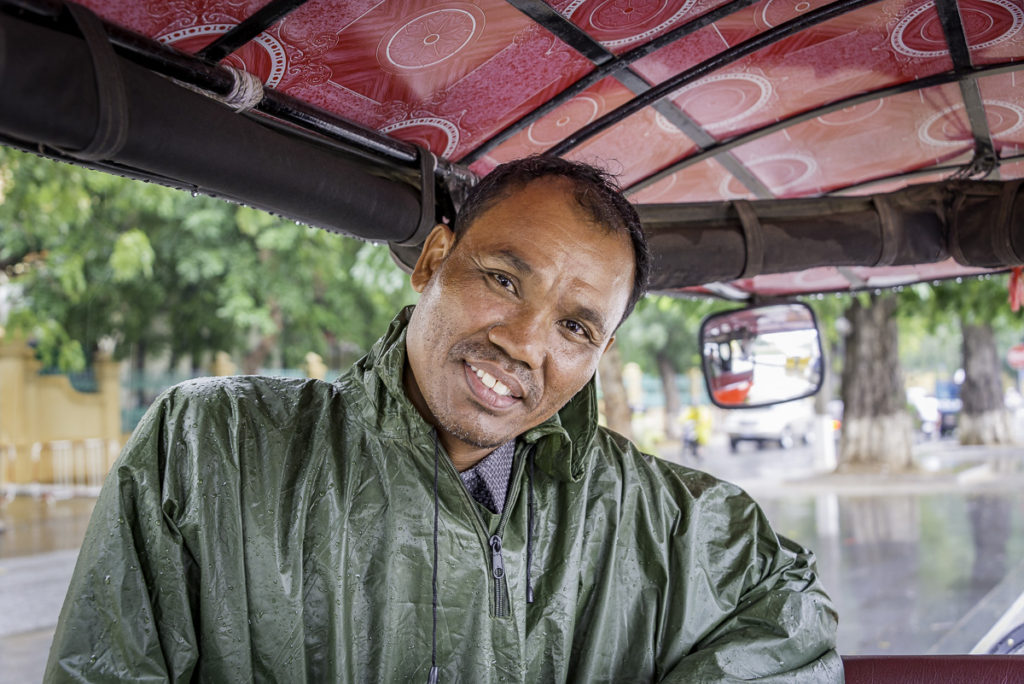 I walked outside, keeping under the trees, but it was impossible not to get wet.

I only had a 10-minute walk to reach Tarek's office, but I opted for a tuk-tuk to keep what wasn't already soaked dry.

My driver introduced himself as Visal, and we sat and talked in the shelter of his covered tuk-tuk for a while before he took me to the office.

He had a little black book that he asked me to sign, because he said he was working on his English.

I marveled at all the greetings and many different languages the book contained.

I asked if I could take his picture, and he said yes, but told me his face wasn't as pretty as it should be, because he had woken up late. He said this as he mashed his face between his hands while I laughed.

I told him I thought his face was beautiful and that the camera would love him. After I got his picture, he took me to Tarek's office building. I ran up the steps, my feet miserably sodden as were the lower third of my pant legs.

After I collected Tarek, we went to meet Dominique. She wanted to show me a jewelry shop that she was helping someone with. It was a beautiful shop, completely enclosed and air-conditioned - whew. They worked by appointment only.

We talked to the girls in the back who were making the jewelry and spoke with the French woman who was running things.

Afterwards, we went next door to a little French restaurant. They served several types of fresh-squeezed juice, and I opted for watermelon - so fresh and sweet, my mouth waters even now thinking about it.

We had a relaxing meal after which we dropped Dominique off at a meeting, and I accompanied Tarek back to his office.

We sat outside so Tarek could take a smoke break, and we discussed my finances, the state of the world, and politics for quite some time.

After a short meeting with his guys at the office, we headed back to the apartment where I finally relinquished my wet shoes and clothes - what a relief. I decided from then on, I'd wear my Chacos - no worries if my feet got wet in sandals.

We left and picked up Dominique and then stopped by doggie daycare to pick up her dog.

Now that was a sight - the three of us and a big Golden all in one tuk-tuk!

The ride took us past the Russian Market and navigated through some more impossible-looking traffic. Somehow we made it. Upon arrival, Dominique showed me around the place. It was beautiful with a large kitchen and several stories tall tucked between other houses and shops in a more suburban environment than the apartment in BKK1.

I went up to the rooftop to get some photos, but the view wasn't what I had hoped, since it was blocked on one side by the angle of the roof. 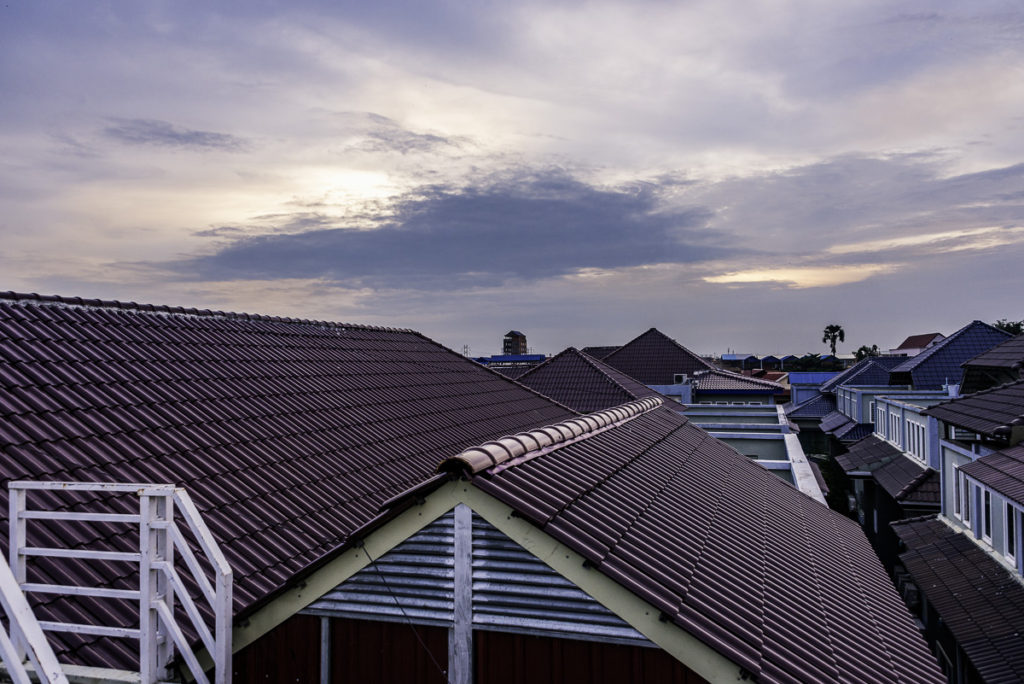 As the late afternoon surrendered to the gloaming, we walked to a small outdoor restaurant owned by their neighbors.

I tried the Pad Thai, which was the best I've ever had. No surprise there!

I did so much wonderful eating on this trip, but found my clothes were fitting especially loose, probably due to all the walking in the extreme heat and carrying my heavy pack full of camera equipment.

A beer at the end of the sweaty day was cool silk sliding down my throat, and the twinkling lights strung across the outdoor eating area made for a dreamy ambiance. I had that other-world feeling as if this wasn't real.

It was such an amazing trip, and it was mine.

When we returned to the house, I felt so dirty and grimy I could hardly stand myself. I hadn't brought anything with me, but it was decided that I was not going back to the apartment.

I took a shower and borrowed some jammies and toiletries from Dominique.

The three of us sat in the living room and watched a French show with English subtitles. I could barely keep my eyes open and finally roused myself to climb the three stories up to bed.

A few hours into a wonderful snooze, some especially vigorous barking from next store woke me.

Plagued by jet lag, I had a rough time getting back to sleep, but finally dozed off until I woke to the sounds of the house coming to life.

I stretched and looked askance at my loathsomely dirty clothes before donning them once again. We headed out, and I wondered with excitement and a heart full of gratitude what this new day would bring.

I'm converting my website over to another platform. It's going to take a little time and a lot of effort, so it may take even longer for the next installment, but it will come! Please stay tuned...