Early Saturday morning, the sun not yet up, Bauer and I piled into the car to meet my friend, Pat, at Vickery Creek Trail.

Pat's on a quest with his dog, Dugg E. Fresh (I know, awesome dog name, right?) to see/hike/photograph beautiful Georgia spots, which are ubiquitous.

He and Dugg E. will be busy for a long time.

Bauer panted heavily as we merged onto the freeway. The poor guy is so nervous about everything. I've been putting his dog bed up front on the passenger seat and that seems to help. But yesterday, oh my, he was excited, nervous, panting, and whining the entire car ride there.

The first spot I navigated to wasn't the right place. After a little texting, we caught up with Pat and Dugg E. as the night kissed the day awake through a pink haze of humidity.

The trails at Vickery Creek ramble through areas of lush fern growth, which, thankfully, are in the shade or our trek yesterday would have been intolerable.

Early morning is best to beat the heat, but the humidity turns to sweat on the skin in a heartbeat.

Our first stop was a less-than-picturesque spillway. My photos here came out flat and ugly. The sun was already glaring, and the water was cloudy with tones of yellow and brown.

The creek is a tributary of the Chattahoochee River, which is, unfortunately, not known for its cleanliness.

A sign proclaimed that if the water is brown and frothy, it means the bacteria count is probably high. 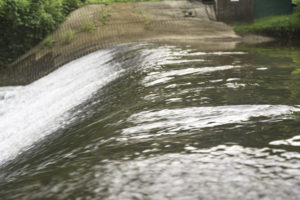 The colors seemed dull and flat, and the spot wasn't particularly breathtaking

We found ourselves having a little difficulty in discerning the trails - searching for the best paths to the water, some of which were quite steep and a little slippery. Nevertheless, we managed to get where we wanted to go without any major slips or falls.

Thankfully, Pat had his tiny tripod, so I wasn't carrying mine which definitely would have made it harder. The dogs seemed to be having a great time, and Bauer was a little better behaved under Dugg E's calming influence. 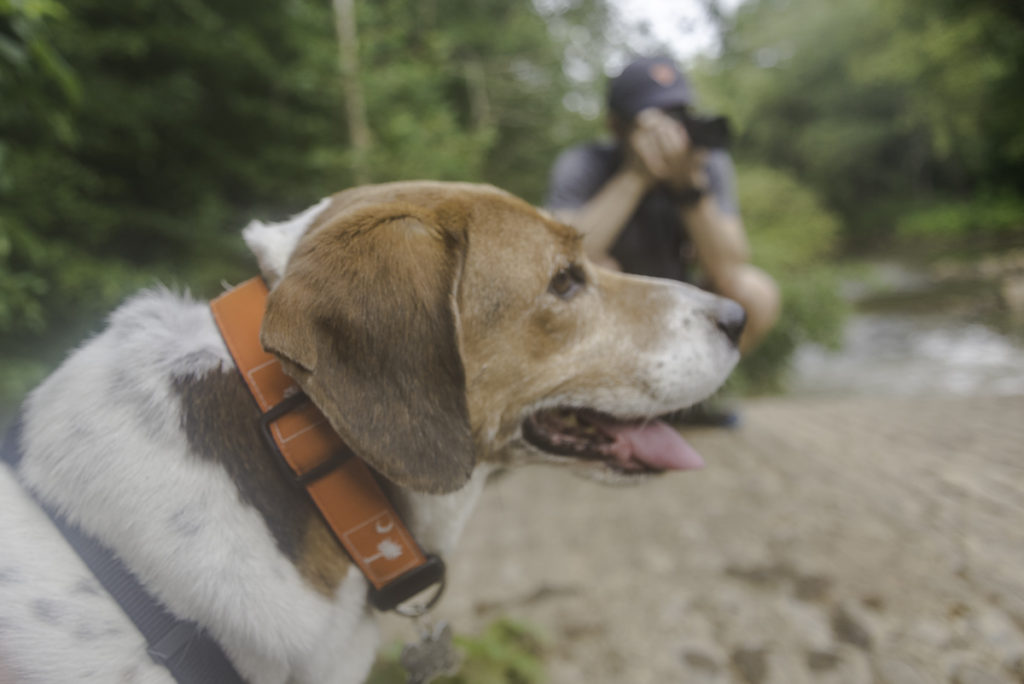 Our next stop was a graceful little waterfall that spilled down from an old mill. Pat got some good photos here, and I used his tripod to capture a few.

During post-processing, I was chagrined to see that I hadn't taken more photos from different angles in this particular spot.

Pat's photos here were better composed to leave out the glaring sun.

I enjoy shooting into the sun, which is a gamble that often pays off for me. In this particular instance, I was less than satisfied with the results.

As anyone who takes photos knows, photography is all about capturing light in the way that best shows your subject. It's easier said than done!

My favorite shots here were some candids of a charming couple stepping out on the stones in front of the waterfall.

It was hard to get a good shot through the mist, but I loved one in particular of the man holding out his hand to help the woman, their hands grasping each other. 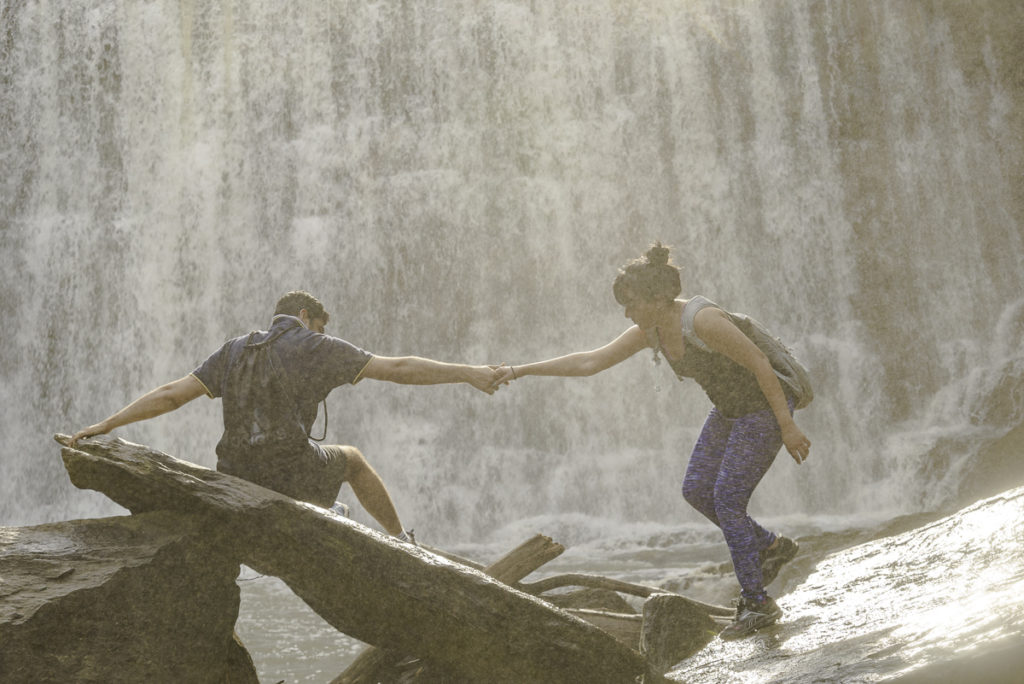 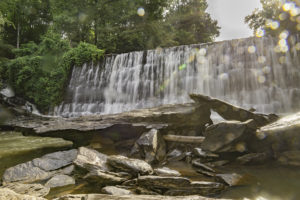 After wandering for a little while and checking in at the many maps along the trail, we came to a small bridge. We crossed over to find ourselves almost atop a busy road, so we turned right back around.

This is where I got my favorite shot of the day - a picture of the bridge dressed in green foliage. I tried more shooting into the sun from the middle of the bridge back toward the falls, but the results were awful - too glaring and bright for it to work, even with an ND filter. 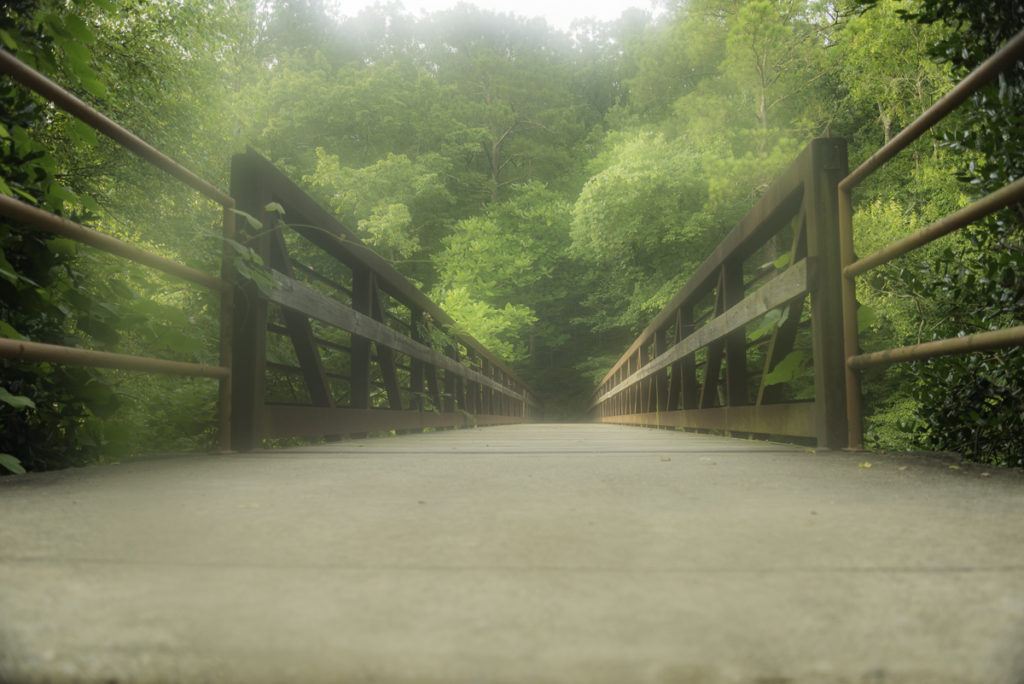 We found ourselves at the covered bridge next, which was teeming with people, mostly getting photographs of each other. We dodged around, trying not to disrupt anyone's photo sessions, and crossed over to the ruins.

Unlike Sweetwater, these ruins don't seem ruinous; rather, they're well restored and house a public restroom in the back.

Maybe we missed the actual ruins?

Back on the trail, we bumped into a man who was toting what looked to me like a pretty heavy pack. He said it was one of his lighter ones. I asked him if he had ever hiked the Appalachian Trail. He said he had, and we discussed it with him for a few minutes.

Then we were off and wandering again for quite a while and found ourselves somewhat lost as to where the cars were parked.

Pat spied a beautiful Heron on the other side of the creek. I took a picture, but 85mm wasn't enough to get a close- up of the stately bird.

Can you spot him in the photo? 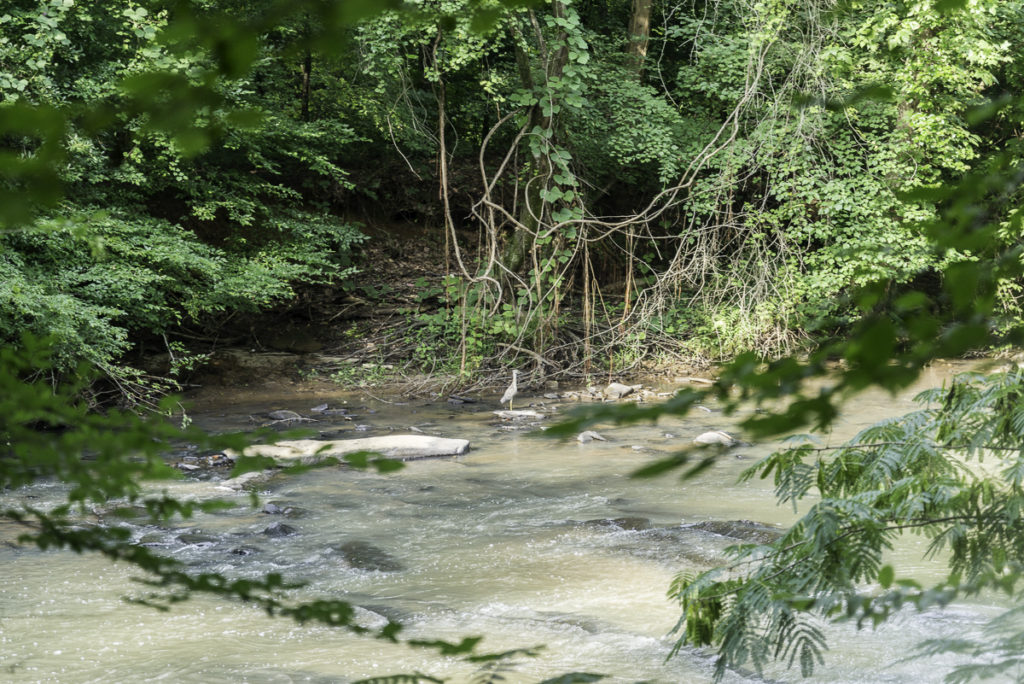 After more wandering and looking at maps, we eventually found the trail we needed. By this time, we'd been out for nearly three hours.

We walked past one more sweet-looking dog on the way out, and Bauer flew into a high-pitched screaming frenzy. Ugh. After that, the dogs seemed tired, and Dugg E was stopping to lick his paws. We were all ready to be in our air-conditioned cars heading home!

Only a few minutes down the freeway was the usual stop-and-go traffic through Atlanta.

Pulling up to the house, Bauer was anxious to be out of the car. As soon as we got inside, I plunked him in the sink for a bath.

It was gratifying to see that he was actually worn out - he napped the entire rest of the day and barely gave me a glance as I came and went from the house a couple of times.

Friends, dogs, exercise, and photography along with a state rich with history and beautiful indigenous scenery all makes for the start to a great weekend.

Now off to a luncheon and a going-away party.

Cheers to the rest of your weekend!