The air was thick with anticipation.

Clouds of lazy, sulfurous-smelling smoke drifted down from the upper field where they were lighting part of the ground show.

Despite the heat, I was wearing jeans.

I donned the leather jacket, put in earplugs, pulled the motorcycle helmet down over my head, and lowered the visor.

It was suffocating, but I didn't mind.

I looked over toward the row of barrels, about 30 of them - silent sentinels fully loaded with approximately 60 mortars ready to be lit.

Bill was standing next to me.

He lit the flare, the end of it springing to life with a hiss and a flash of blinding light.

I pulled on some gloves, and he handed me the flare, gesturing toward the leftmost barrel in the line. Like reading, I'd be moving left to right.

It was past golden hour, fully dark out.

I walked to the first barrel and got down on my hands and knees, my left shoulder touching the barrel. The hand holding the flare trembled with the potent brew of adrenaline and excitement, seasoned with a tinge of fear.

The sound of my breathing was amplified inside the helmet, the visor fogging slightly.

Someone waved the flashlight - my signal to go. I reached down with my left hand to find the fuse, fumbling in the dark and the restricted vision of the helmet.

I removed the fuse cap and touched the now-exposed end with the flare. 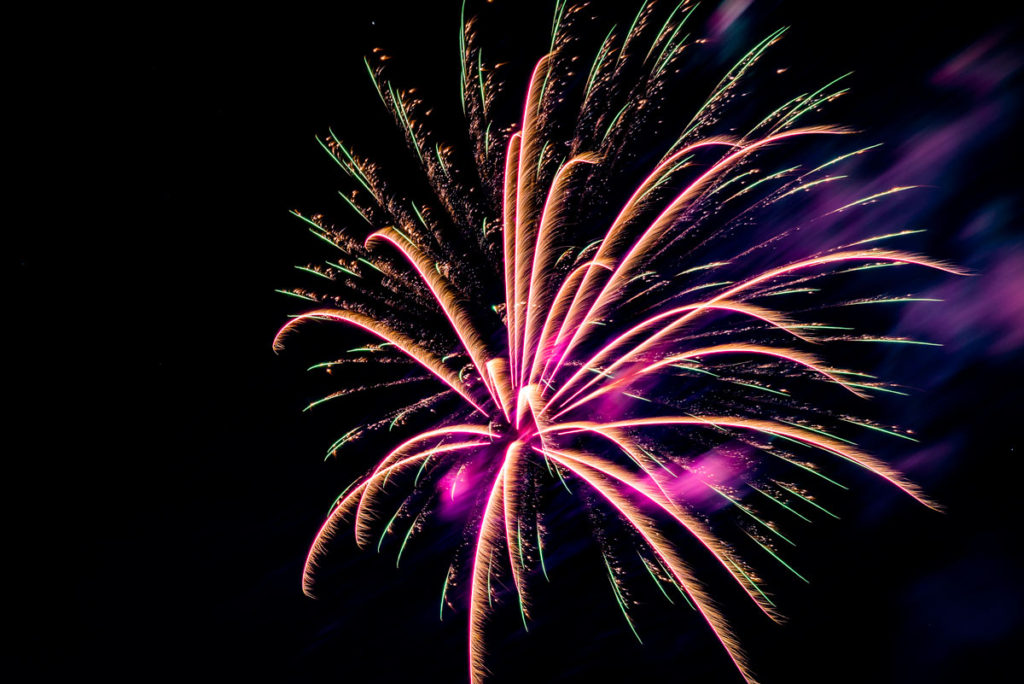 The moment I saw it light, I ducked; but not before the concussive thump of the mortar jettisoning out of the tube nearly knocked me over, the violence of it reverberating throughout my body.

I let out a scream - part glee, part terror - as I reached up and removed the next fuse cap.

It only took a few moments before I had my rhythm, and then it was all glee.

Crawl, remove the fuse cap, touch the flare to the fuse, duck.

Each sand-packed barrel held 2-3 mortar-filled tubes that needed to be lit before I could move to the next barrel.

It was the 4th of July and a month and a half after my 18th birthday. For the first time, I was allowed to participate on the ground crew of the City of Claremont's fireworks extravaganza, a position I cherished and in which I participated for many years. 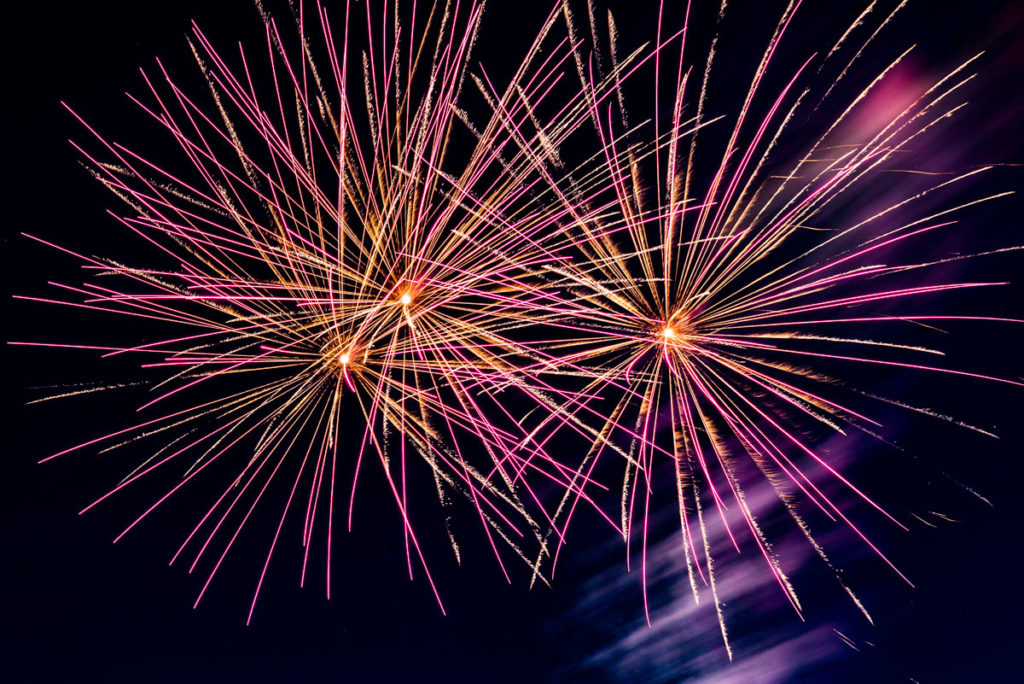 I was half-way through that first volley, high on adrenaline, when I experienced my first "flower pot."

The mortar failed to achieve lift and exploded half-way up the tube, raining down a shower of hot heavy sparks and flaming embers all over me.

I turned my head to the side and saw the rest of the crew yelling and gesturing for me to stay down as we had practiced.

It wasn't until I moved on to the next barrel that I felt someone hitting my legs and realized it was Bill trying to tamp down my smoldering pants.

I kept moving, my heart pounding.

When I got to the last mortar, I jumped up and ran back toward the "kitchen"  - the locker full of mortars that was covered by a heavy fire-proof tarp.

I handed off the flare and peeled off the helmet and jacket.

I couldn't contain my excitement.

"That was sooooo much fun!" I yelled. Bill gave me a big bear hug.

An entire volley of mortars now needed to be "hot loaded," into the tubes.

One of the crew grabbed a long claw-like instrument and started pulling debris -some of it burning - out of each tube, making sure no embers were left behind.

The rest of us advanced, mortars in hand.

Being careful not to put our faces over the tubes, we held onto the long fuses and slowly lowered the mortars down to the bottom, draping the fuses alongside the barrels and getting them prepped for the next lucky person whose turn it was to light.

Some of my most cherished memories are of the 4th of July - my favorite holiday.

Growing up in the small town of Claremont in So Cal, the 4th was a big deal, and I do mean big - an all-day, all-night affair that centered itself around Memorial Park in the heart of the city and moved to the football field over at the colleges as day turned to evening. 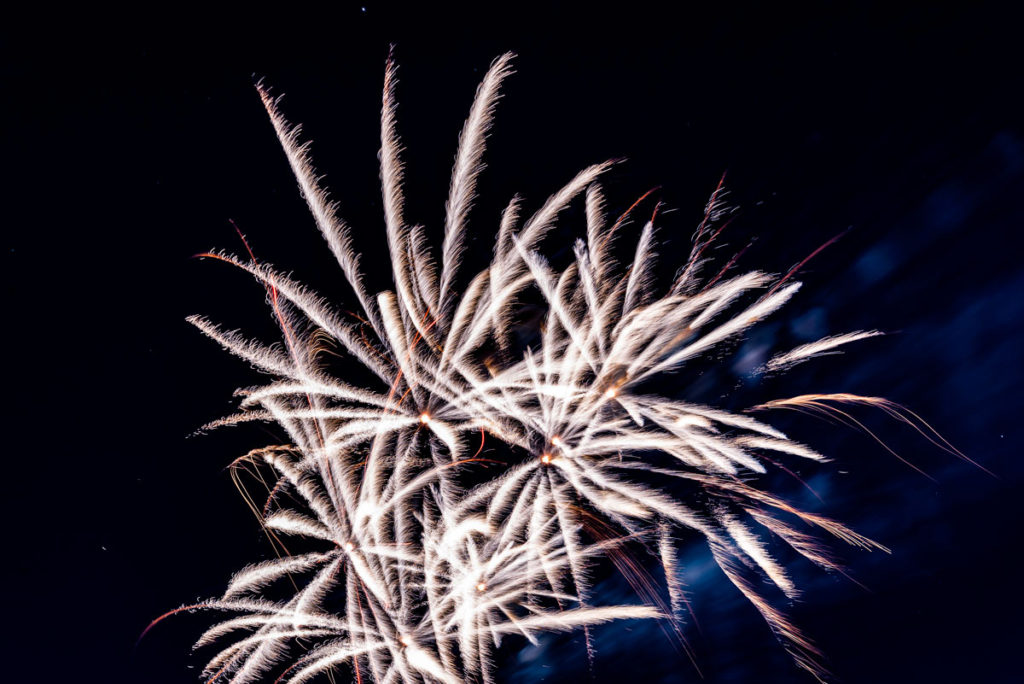 Bill, a pyrotechnician, and his family - wife, Nita, and kids, Mike and Laura - always helped with the set up, execution, and tear down of the fireworks show.

Our families were close, spending lots of time together, including holidays.

They had been involved in the fireworks show for as long as I could remember.

Though I was terrified of fireworks as a young child, Bill - with his other-worldly amount of patience - had delivered me of that fear early on, and even had me excitedly waiting for the time when I could finally be part of the big show.

When Bill passed away some years ago, it was fitting that his kids arranged for us to launch a fireworks show from the bow of a ferry boat underneath the Golden Gate bridge.

The mortars that evening had a little extra cargo - Bill's ashes.

This year, the 4th may not have been as exciting as the first time I got to hand-light a volley of mortars, but I still had a blast.

I spent the 3rd and most of the 4th in Highlands, NC with my dear friend, Marla. The evening of the 4th found us back in Atlanta and stationed on top of Marla's parking garage across from Lenox Mall where we had a great view of the fireworks.

Of course, I set up my tripod and camera.

Nowadays, most fireworks shows are electronically fired. I hope someday to have another chance at hand-firing a volley of mortars, feeling that concussive thump roll through my body and enjoying that soul-gratifying pump of adrenaline. Until then - I'll happily take my photographs as I think of Bill and how he and his family have blessed my life many times over.

Hope everyone had a great 4th too!