My Nikon D610 is en route to the warranty people to be fixed. It won't format disks in slot 1, and a small oil blotch appears in the lower right third of the screen, regardless of what lens I employ.

With my camera gone, I feel I'm missing an appendage. Anxiety provoking, to say the least. I hope it comes back to me quickly. I need another camera body. I've been getting by with one camera, but I don't want to get caught short. With my D610 in the shop, all I have is my Nikon D40, which is not up to the task of an event or real estate shoot, though I can rent a D610 in a pinch if need be. I had plans to shoot this weekend with friends, though, so I dusted off the D40. 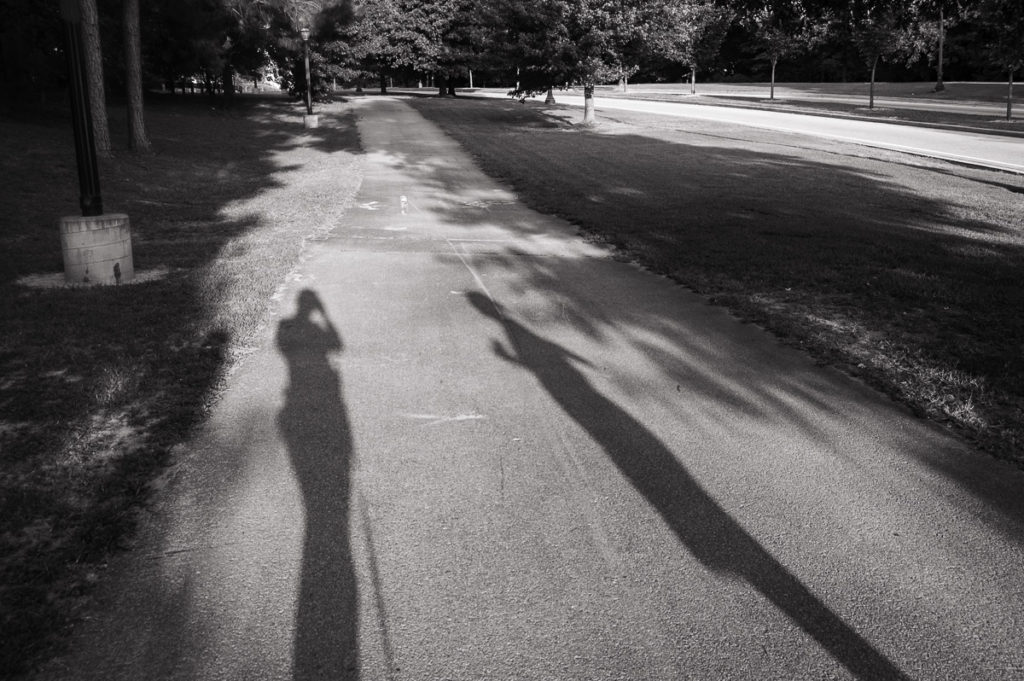 I stepped off the front porch early this morning into the embrace of what felt like a warm wet blanket.

The smell of the flowers creeping up the porch posts lightly scented the air as the sky began to grow light.

Heat and humidity be damned, a dog/photo walk was planned. Eileen, Patrick, and I were geared up to shoot.

I knew it would be challenging not to have my trusted D610, but not that challenging! I was dogged by focusing issues all morning to the point that near the end of the walk, the camera locked up and refused to take pictures at all.

After getting home and doing some research, I realized I was having a diopter issue. Not sure how it got so out of whack, perhaps during one of Bauer's leash lunges early in the walk, but looks like I've fixed the problem. Yeah! 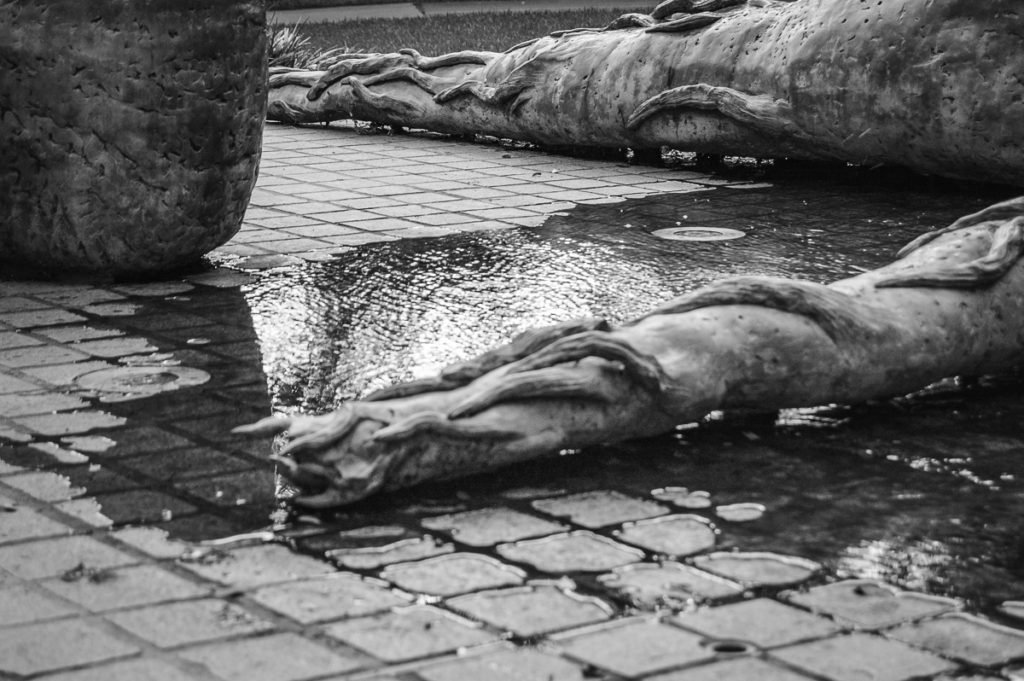 When I first took up photography, I shot almost exclusively black and whites, because I was processing and printing my own photos in the darkroom, but also because I love the look.

Black and whites showcase texture and shadow in an evocative way.

I haven't shot black and white in a while, and, like all things digital, post-processing presents its own trials, in which I revel.

Subtle variations in the tonal range can drive me to madness and joy as I experiment with look after look for each shot. Who knew black and white could look so red, or green, or blue?? Contrast is also an issue, especially with a blue sky, which would look so nice in color, but without clouds for texture, can fall flat when rendered in black and white. 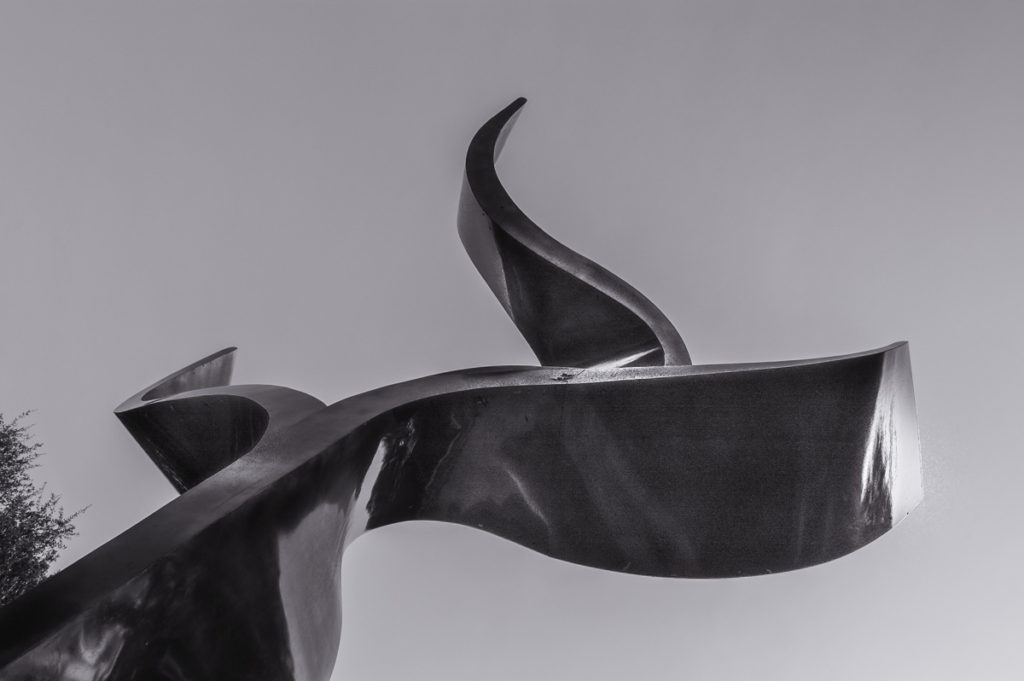 As for this morning's walk, well, maybe not my best photo effort, but a good time with friends and dogs.

The sculptures along the Freedom Park Trail are interesting to look at and fun to shoot.

Pat had his hands full trying to get Dugg E to pose - Dugg E being coy while Eileen tried coaxing.

Of course, Bauer is still his crazy-ass self, screaming at other dogs and lunging frantically, even as his tail wags. He was fine walking next to Dugg E, but anyone else out walking a dog who had the misfortune of crossing our path this morning got an earful of that signature scream, as did we. 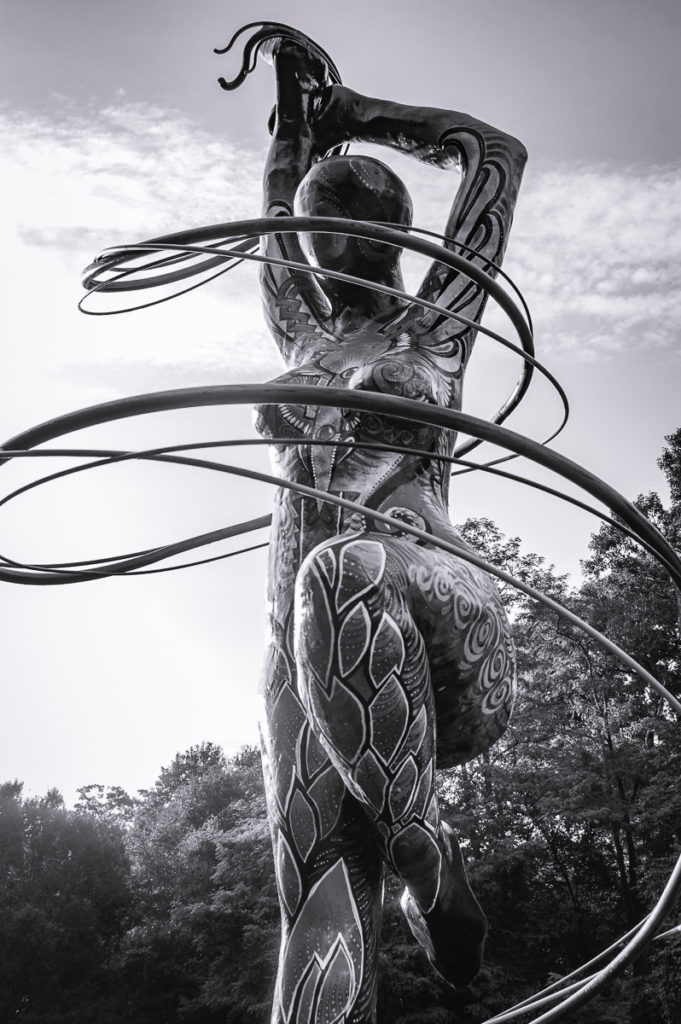 One of the things I love about photography is the continual challenge to do better. This morning's humbling lesson was about user error and a reminder that I must know my equipment inside and out.

Hope you had a great weekend!