Since I live in the city, many of my shots are cityscapes. It's so easy to grab the camera and run out the door and, within only a few minutes, I'm standing under a tall building or across from an iconic landmark like the Fox Theatre.

I've always been attracted to architecture with its attendant lines, shapes, patterns, and glass.

I took the above shot on another one of my nights out with the AUPWs. There were a ton of people out for this shoot, so it was challenging, to say the least, to get the shot I wanted. But, I did manage to get a few I was happy with. I have so much fun with the tripod and capturing light trails - combining anywhere from 2-7 pictures with HDR in Lightroom to get the finished picture I envision. My personal style is to avoid the heavy-handedness that makes HDR look animated, though sometimes that's the look I'm going for. But, as I've mentioned, I typically like to shoot ordinary scenes and try to bring out the extraordinary contained within. 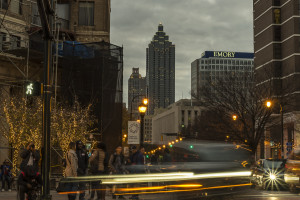 I love shooting at full dark as well, stalking the lights of the city for just the right scene. It's fun to set up the tripod and take picture after picture at varying shutter speeds and apertures, getting the light trails from the cars and the starbursts from nearby headlights and street lamps. 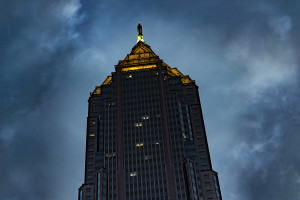 The folks over at the Bank of America building don't take too kindly to photographers. Late afternoon, we were over there getting shots, but the security guard came out. She didn't have much of a sense of humor and was yelling at us to get out of there.

I've been kicked out of a few places with my camera over the last year.

It's okay to stand on the sidewalk and take pictures - they can't kick you off the public sidewalk. But, get anywhere on the building property, and the security guards come right out and tell you to get lost. Ugh. It's so annoying. Score one for the terrorists.

This shot had the look I was going for - total Gotham.

Visiting Historic Culloden Battlefield
Beautiful Broadford Bay
Looking for the Loch Ness Monster
An Atlanta Photographer in Scotland
Coming' Round the Bend
New Release in the Atlanta Gallery
Did You See the Article I'm in on Redfin?
Getting Creative With Daytime Long Exposures
Thanks to The Gallery at Trilith
Trilith Exhibit