Blog > The Universe Gives a Blessing!

The Universe Gives a Blessing!

On Friday afternoon, my AC quit.

First-world problems, I know, but daunting.

It was hot in my house on Friday night - 89 degrees, humid, and sweaty.

Thankfully, Bauer was with my daughter.

I filled a big zip-top baggie with ice and put it on top of my covers over my feet. Not the same as air-conditioning, but it helped. I fell asleep asking God that it be a small fix and not a new air-conditioner.

Saturday morning, I was up and driving the 5 hours to Pensacola.

I cranked the tunes and the AC and banished my worries.

The last few years have taught me a thing or two about living in the moment.

My son, Rory, was best man to his long-time friend Nick, and though I had initially thought I couldn't make it down to Florida due to financial concerns, I simply refused to miss this wedding.

The hell with it. I can't get these moments back. Things have a way of working out, and I'm confident that they will. Relationships and people are what matter. And these people matter to me - a lot. 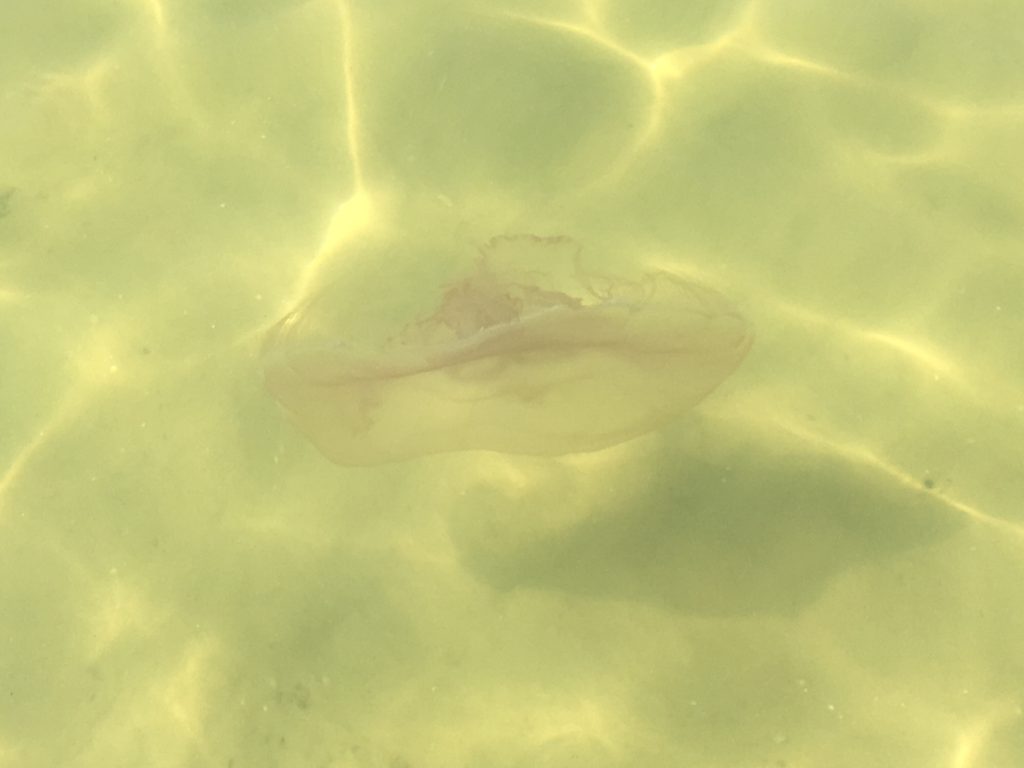 I arrived at the Pensacola Grand Hotel around 12:30...waaaayy before  the 4 pm check-in time. But, they were accommodating.

Nerd fact: If you're out in the sun, your body won't make vitamin D unless the sun is at an angle of at least 50 degrees or higher. I checked the azimuth table on my phone before I went - prime vitamin-D time.

Of course, you shouldn't go without sunscreen for long, but you can't get the vitamin D when wearing the sunscreen. I took a long walk along the beach front before finding a spot, sitting down, and applying sunscreen.

It was hot, but felt like heaven as I laid down for a little rest. Don't you love that dreamy feeling when you're lying on the beach, half-asleep, listening to the water and the noise of kids having a blast?

I dozed briefly, then grew overly hot and got up and into the water.

The Gulf isn't exactly refreshing, but it felt good. I dodged a jellyfish and watched, fascinated, as it moved its gelatinous body gracefully through the green and blue water. I ran back to my towel so I could grab my phone and snap a few pictures. I spent a little less than two hours playing, but it felt amazing.

No way was I going to be that close to the beach and not go, even if pressed for time.

I was hit by a touch of melancholy as I showered, put on my makeup and threw on my dress.

I acknowledged the feeling and moved on.

I was glad to be here and excited to see everyone. The venue was only about a half-mile away, so I called an Uber and headed to the Lee House. My lovely, soon-to-be daughter-in-law, Kristen, greeted me.

We headed across to the park on the water's edge where the ceremony was to take place. There was some trepidation as we listened to the thunder and saw some rather Zeusian lightening bolts in the distance.

The lively breeze was refreshing, though another harbinger of the storm rolling in. The bride's father announced a postponement of the ceremony until the storm passed, but then reversed himself as they decided to move forward.

It started right on time at 5 pm. And, what a ceremony. Beautiful.

I have to note right here...as you may have noticed already from the less-than-satisfactory pix, that I didn't bring my Nikon to the wedding. "What???" you ask. I struggled mightily with this, but in the end I decided I wanted to be fully present for the evening.

If I had my Nikon, I would have spent much too much time taking photos, and I am not a wedding photographer. As it was, the bride and groom asked that we all try to be present and refrain from too many phone pictures. Okay - so I got a few of those, and they're pretty low quality, but not many.

A young woman sang an inspired acapella rendition of the Ave Maria to start things off.

As soon as I saw Nicholas come down the aisle, my eyes sprung a leak like the little Dutch Boy's dike, and darn if I forgot tissues. Then came Rory with Nick's mom, Helena - oh boy, there was no hope for me now.

The boys were so handsome in their suits. The groomsmen came behind and those tears kept flowing as I watched these fine young men, whom just yesterday were little boys hanging out in our basement playing video games and ping pong and eating me out of house and home.

And the story is so sweet - how Nick took a job at Jet's Pizza when they were in high school just to be near Anna. The ceremony was touching. The couple wrote their own vows, and they laughed and cried. Let's just say I kept my sunglasses on, and it wasn't sunny out. 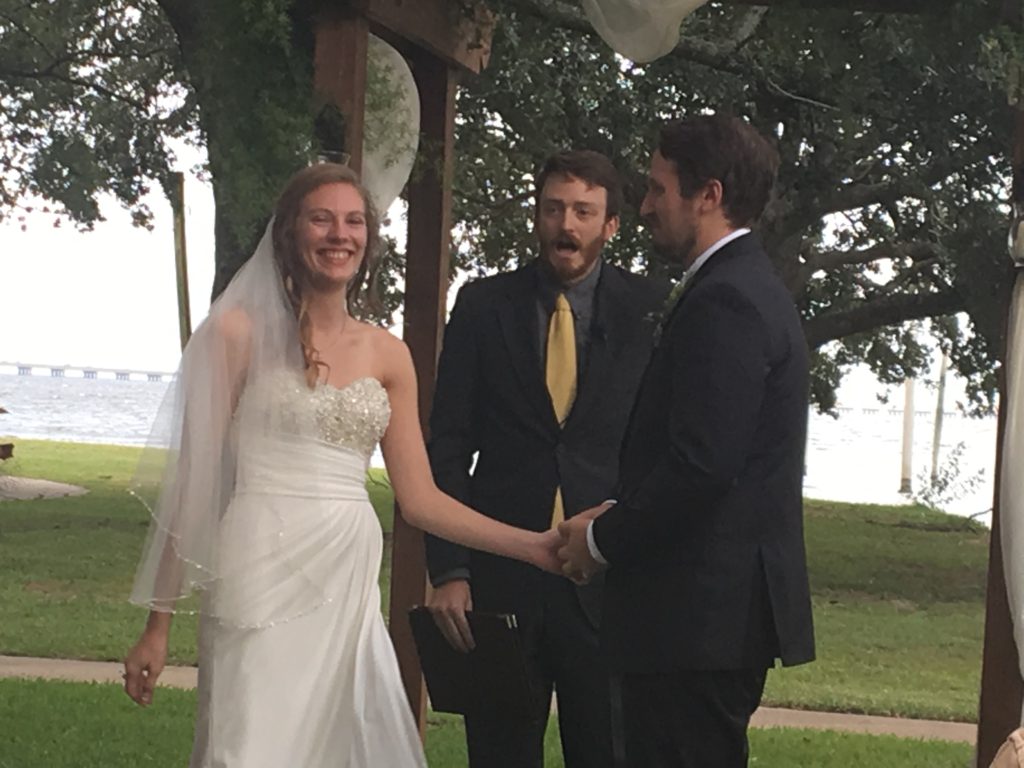 As the ceremony wrapped up, we were walking back to the Lee House, when I spotted a rainbow.

I started yelling to "let the photographer know - quick!" Soon enough, the couple was at water's edge with the rainbow spilling over their shoulders in the background.

I could not resist the urge to photograph and pulled out my iPhone.

Even the universe blessed this union.

No sooner did the photographer get what I assume will be some epic shots of the couple and the rainbow, then the rain began to come down in earnest. We ran across the street back to the Lee House for the reception. 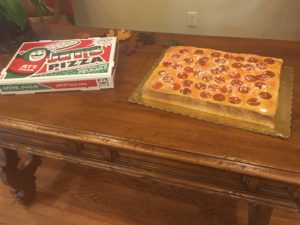 We stayed inside for cocktails and to let the rain pass. The bride and groom each had a signature drink, of which I must say I heartily enjoyed the "Nick" - vodka, ginger beer, and lime.

It was a refreshing drink for a hot, steamy afternoon. We headed to the patio after the rain let up to be greeted by a beautiful tableau.

I can't remember ever enjoying myself so much at a wedding. It was plain good fun and such a joy to see so many of my son's childhood friends in one place - all dressed up and looking dapper.

And it was Nick and Anna, so of course the playlist was phenomenal.

Laughing, loving, drinking, eating, visiting, dancing and more dancing. What a night. I can still hear the final strains of Don McLean's Bye-Bye Miss American Pie as we wandered to a patch of grass across the street to send the happy couple off in a shower of birdseed.

A shared Uber ride back to my hotel, and I was feeling exhilarated. I stopped in the hotel bar where I made a few new friends over popcorn and a beer as we shared some lively conversation.

Goodness. Such a fine, fine time.

Blessings to Nick and Anna!

And the AC? It was only a cheap fix on Monday morning - woohoo!

I hope your weekend was good!